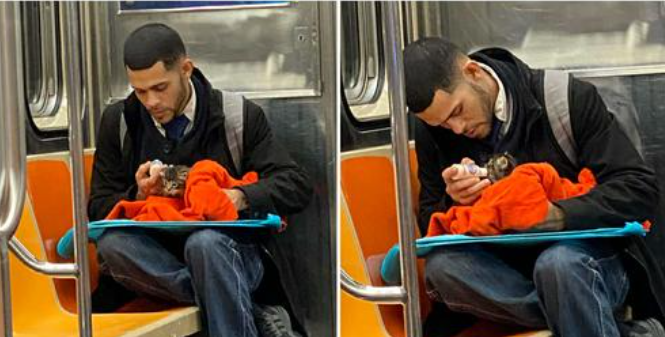 As any New Yorker will tell you, you see a lot of unexpected stuff on the subway. But one woman saw something that left her truly inspired.

Gillian Rogers is the founder of Pet Rescue Squad Inc, and is passionate about helping animals. And last week, she saw something that gave her hope.

She was riding the 1 train home when she spotted a man on the other side of the car, with something in his lap.

She was amazed to realize it was a tiny kitten, wrapped in a towel. Not only that, but the man was bottle-feeding the cat.

“You could see the caring,” Gillian told The Dodo. “My heart felt like it was going to explode to see someone with that much caring. He was so in the moment.”

“The kitten was looking up at him as he fed her. It was so heartwarming.”

She had to know more. She went up and asked the man about his little cat, and he told her his inspiring story.

He told Gillian that he had found the cat in the city between two buildings, and decided to take her in, feeding her and keeping her warm. Gillian posted the photo on Facebook, where it has been shared over 13,000 times and received over a thousand comments.

She was thrilled that the precious moment meant as much to other people as it did to her.

“I had no idea the photo was going to resonate as it has. It makes me happy,” she told The Dodo. “I think we all need something to cheer us up.”

It definitely cheered us up! We’re glad there are people out there willing to go out of their way to save a kitten and make sure they get all the love they need.