A desperate woman clung to her 17-year-old show horse Astro for three hours to save him from drowning in mud.

Nicole Graham worked hard to keep her horse calm and above the deadly quagmire mud as the ocean tide came dangerously close.

Astro, who weighs 900 lbs, had got stuck in the mud on an afternoon ride in Melbourne, Australia.

Nicole’s daughter Paris had joined her on her ride and her horse had also got stuck. Nicole was able to free Paris’ horse but not the larger horse Astro. 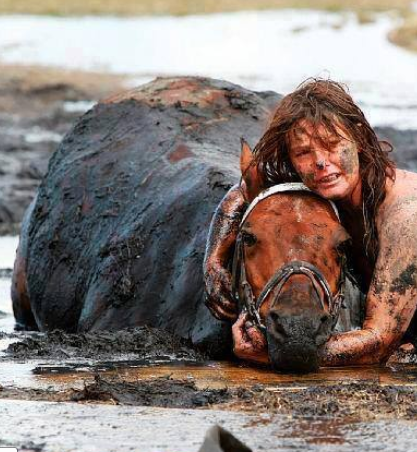 Efforts to free Astro caused him to get stuck even more, so all Nicole could do was try and keep him calm until help arrived.

Paris was able to call for help and Astro was sedated while a harness was attached to him so a tractor could pull him out.

Nicole, who owns more than 10 horses, said it took three hours for rescuers to pull her horse to safety.

“It was terrifying. It was also heartbreaking to see my horse exhausted and struggling,” Nicole said, as per the Daily Mail citing The Geelong Advertiser.

She added: “I’ve been riding here for 20 years and never had a drama. I’ve never seen any signs and didn’t realize it was so boggy.”

Fire lieutenant Roger Buckle, who helped to pull the horse to safety, described the mud like “quicksand.”

Thankfully Astro suffered only dehydration and some muscle soreness.

“A lot of horses don’t make it and I think without the owner there the chance of survival would have been a lot lower,” said vet Stacey Sullivan.

I’m so thankful that Nicole was able to keep Astro calm until he could be pulled out. I can’t imagine how frightened he must have been.

Let more people know about this sweet horse and her brave owner and share this story.