Rescuers spent hours digging out a goat stuck in a giant irrigation pipe. Sometimes animals are caught in such a tricky place that they need the help of human beings to get out of that place. Unknowingly they are caught in such types of places.

Like this goat who was stuck in a large irrigation pipe and then a group of kind people came forward and started a great mission to save him. 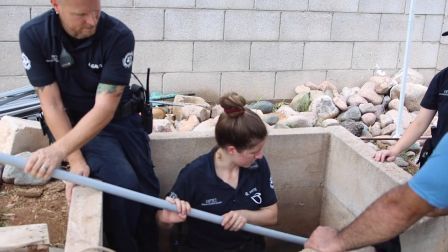 The Arizona Humane Society receive the call that an 8-month-old goat had fallen into a 250-foot long irrigation pipe. The human society told that a neighbor heard the crying of the goat from underground.

The rescue team when arrived at the scene they realized that the goat could not be saved easily because of the size of the pipe, they were not able to locate him. So they decided to return the next day with better types of equipment to save the goat.

The next day the rescue team came with many types of equipment including a snake cam to search for the goat but still, they were not able to find him. So they were left with only one option, they started digging in and hope for the best. 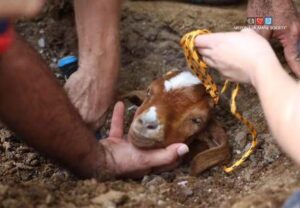 According to Emergency Animal Medical Technician Gracie Watts, they just went by faith as to where they thought the goat was. As they started digging into the pipe with shovels and a sledgehammer at last they were able to find the goat and one of the rescuers was able to hold on to him while they continued to dig him out.

This rescue mission continued for 6 hours and it took a lot of hard work but in the end, they were able to get the goat free. In spite of the ordeal, the goat seemed unharmed and after the rescue, he joined his fellow goats.