One day three men are out having a relaxing day fishing, when suddenly they catch a mermaid 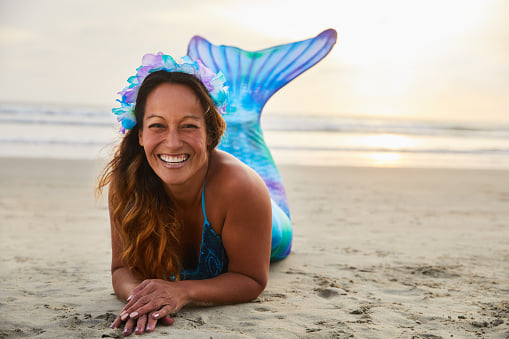 One day three men are out having a relaxing day fishing, when suddenly they catch a mermaid. After hauling the mermaid up in a net, she promises that if the men set her free, in return she will grant each of them a wish.
The first man doesn’t believe it so he says, “Alright, if you can really grant wishes, then double my IQ.” The mermaid says, “Done” and suddenly, the first man starts to flawlessly recite Shakespeare and analyze it with extreme insight.
The second man is so amazed, he looks at the mermaid and says, “Triple my IQ.” The mermaid says, “Done” and the second man starts to recite solutions to all of the mathematical problems that have been stumping all of the scientists in various fields from physics to chemistry, etc.
The third man is so enthralled with the changes in his friends, he
says to the mermaid: “Quintuple my IQ.” The mermaid looks at him and says, “You know, I normally don’t try to change people’s minds when they make a wish, but I really wish you’d reconsider.”
The man responds, “Nope, I want you to increase my IQ times five, and if you don’t do it, I won’t set you free.”
“Please,” said the mermaid “You don’t know what you’re asking…it’ll change your entire view of the universe. Won’t you ask for something else… a million dollars, anything…
But no matter what the mermaid said, the third man insisted on having his IQ increased by five times it’s usual power.
So the mermaid finally relented and said, “Done.”
The third man became a woman