Man saved a dog dumped with his mouth shut with a tape. 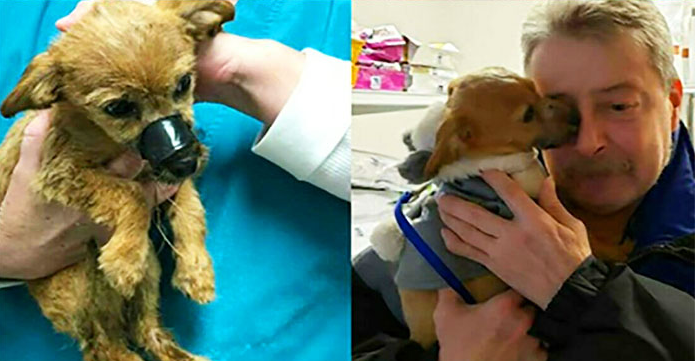 So many animals are dumped in shocking conditions. It shows that many people have pets that they cannot look after.

Here the dog that was dumped, his mouth was shut by the tape. The dog was shivering in the cold. The passerby  Bob Hoelter of Indiana was walking towards the store at night when he heard the strange noise.

He said he went to the place to see from where the sound was coming but didn’t see anything. Then he used his flashlight and saw a dog in a pitiable condition.

He saw a dog that looked scared and its mouth was shut by the black electrical tape. Looking at the condition of the dog, Bob immediately took it to Griffith Animal Hospital where the pup was assessed and it was found that the pup was four months old, hungry, having a broken leg and the skin was damaged where there was a tape.

It also appeared as the pup was thrown from the bridge into the water but instead of falling into the water, the pup landed on the banks of the river.

At the Griffith Animal Hospital, the manager Lori Kovacich wrote that it was something that they had not experienced in 30 years. The pupate the food given hungrily and waged his tail.

The pup was given the name that is Louie and he even found a forever home. Bob’s niece even arranged a meeting between Louie and Bob. It was an emotional meeting where Bob was greeted with love and kisses by Louie.