There are countless animals who are on the edge of extinction and the list of endangered animals has increased. But there are humans who know how to live peacefully with animals.

They have built a special bond with the magnificent creatures based on love and trust. Such people are always ready to help the animals in need. 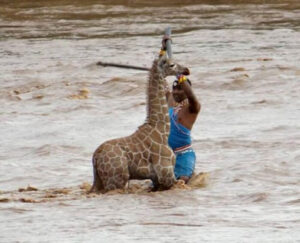 Such was the case of a baby giraffe who was saved from drowning in Kenya. The baby giraffe was caught in the middle of the river Uaso Nyiro, Kenya.

The baby was struggling as the current of the river was very strong. Not only this, but the river was also full of crocodiles. There were very least chances that the baby will survive but help came from where it was least expected.

The scared giraffe was seen by a group of wildlife rangers and locals who rushed to help the baby. The baby was saved due to the heroism and kindness of the guys. The photos of the heroic act were shared online and it was liked by many people. People are showering praise on them calling it a marvelous rescue mission. 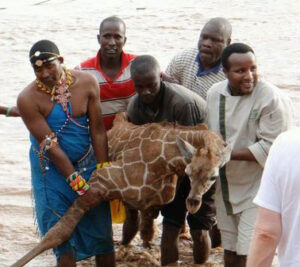 Some species of the giraffe are declared endangered by the International Union for the Conservation of Nature. These are subspecies that roam the lands of Kenya and Tanzania.

There are only 35,000 left in the wild. But they can be saved like the people who saved the baby giraffe. If we are having people like this, then there are chances that we would be able to save the endangered species.