ADVERTISEMENT
“I wanted to take a few minutes to share something incredible that happened today. This afternoon I picked up Andrew from school/ABA and we got on the metro headed home. We ride the metro everyday to and from school, so Andrew is used to it. It is usually about 45min to an hour depending on delays and what not, but as long I keep him occupied with his iPad or my phone he will sit patiently in our seat. Of course I do always have fruit snacks or candy handy, in case he starts trying to get up or move. I’m all about doing anything to keep him happy and sitting. 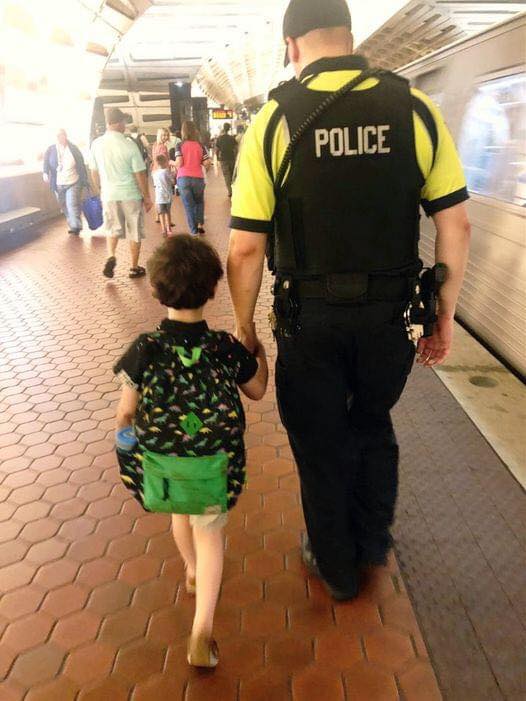 For those of you that don’t know, when you have a child with autism, your child will have some good days and then they will have some bad ones. Today was one of those bad days. Andrews biggest behavior problem (that he has been working on by learning calming strategies) is that sometimes when he gets upset, it will go two steps too far, and escalate into a full on meltdown/breakdown.
Today, Andrew was persistent on wanting to get out of the seat to stand in the middle of train while moving and running back and forth through it (which of course if he did he would fall). I kept trying everything to get him to sit, but he just wouldn’t (this fight went on for 20 min), that is when he his regular toddler tantrum turned into a meltdown, or what I call, the point of no return for him.
He started rolling on the floor, screaming, his shoe fell off and he flung it across the train, all while I’m on the floor trying to calm him down (in a dress) with all the candy I had. Then he starts the kicking, hitting, pulling my hair while everyone in rush hour stares on the train, most thinking I was a bad parent who had an out of control child, even though really he can’t help it. Sometimes Andrews emotions just become too much for him to mentally work through, but when people start staring and Andrew notices, he takes this as opportunity to put on a show. I blurt outloud, “I’m so sorry he has autism!!!” in an attempt to stop the stares. He was getting worse and I knew we had to get off. We got off at Gallery Place, one stop up from Metro Center where we change lines, still he doesn’t let up and it gets worse. He refuses to get back on the train and insists on leaving the station- even though we couldn’t. Now we’re rolling around on the dirty station floor. He is covered in black dirt. I try picking him up but he continues to kick which now gets dirt on me. This goes on for about 15 minutes. Trust me this isn’t my first rodeo as a single parent, but sometimes it just gets the best of me. At this point I am crying out of pure frustration and feeling so sad that Andrew is being judged right now.

I panic as I see someone walking towards us, but it turns out to be a Metro Police Officer. As soon as he comes over Andrew freezes and stares while holding my hands, body mid air, feet stretched out on me, while I was standing. The officer asks me if I needed any help or if he could help by walking us out of station (since he saw how Andrew stopped when he came over) I explained the situation to him and how this wasn’t even our stop. He asked where I was going and I told him Ballston station (a solid 30 minutes from where we were). Without hesitation he said, “Okay I’ll come on the train”.
At this point I’m thinking he means like down the escalator to the train. He starts talking with Andrew and showing him all his gadgets. He then takes off his Velcro police badge from his vest and asks Andrew, “Can you be a police man with me and help me do police work on the train?” Of course Andrew says yes.
The officer ends up riding the metro THE ENTIRE train home with us!!! Whenever he got off he would hold Andrews hand and walk with him. He sat next to Andrew as he requested on the train, acted interested as he showed him silly videos, and he even made funny faces in the Instagram face filters when Andrew asked.
This officer COMPLETELY went out of his way to help Andrew. He honestly restored my faith that there are good people still left in the world.
To that officer, I truly can not say thank you enough for your inmesurable amount of kindness and for making Andrews day (probably his whole year). Throughout the whole ordeal I didn’t get his name, I think his vest said Officer D. Case. Washington Metropolitan Police Dept. Metro Forward MPD DC Police Recruiting Division WUSA 9 Washington Post Express Fox 5 DC NBC Washington ABC 7 News – WJLA WTOP News, please find him and give him a raise! He deserves to be recognized for his incredible kind gesture, and especially for letting Andrew keep the police badge. Thank you thank you!!

7/22 UPDATE: Thank you everyone from the bottom of my heart for recognizing this amazing officer and all of the kind comments! I have received such an incredible outpouring of support and it truly means the world to me!! I wanted to let everyone know that the Officer D. Case has been found!!! I have spoke to him on the phone and it looks like we might be reuniting soon.”
Credit: Taylor Pomilla
About kocok 3767 Articles
solevisible