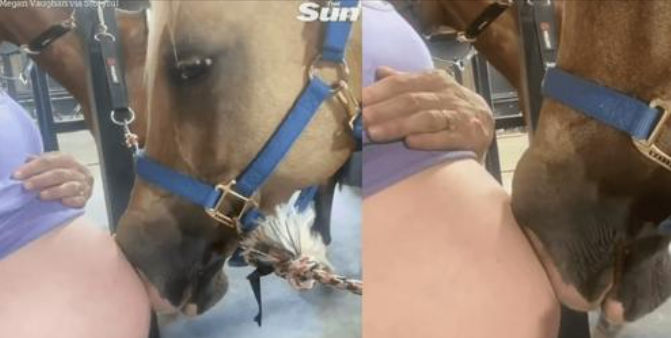 A horse was completely raptured by a woman’s pregnant belly and did not turn her head away from it for quite a while. The four-legged friend named Angel has developed a special interest in Megan Vaughan’s baby bump and always wants to do a little inspection of her belly.

“Every time I’m with my horse, she has to do a belly check,” Megan wrote on YouTube as she posted the heartwarming video. Angel is already building a relationship with the little one, and Megan has no doubt that the gentle horse will be a great present in the baby’s life.

She’s going to be a great big sister!” Megan added.

This is too precious 😍 pic.twitter.com/n4fUSwlj97

After Megan shared the precious moment on YouTube, she was asked, “Does she do that in pasture?” “Yes!” she replied. “Pretty much every time I’m around her.” This certainly is not the first time a woman bearing a child has captured an animal’s attention. A few years ago, an orangutan named Rajang became quite famous after he was seen kissing the bellies of at least four pregnant women.

Through the glass window of his enclosure at the Colchester Zoo, Rajang was seen stroking the glass and giving kisses when a pregnant Maisie Knight arrived. At the time, Maisie was expecting a child and was 37 weeks into her pregnancy. When Maisie visited the zoo in the UK, she was surprised to see that Rajang was completely fixated over her baby bump.

“Rajang ignored me and just stared at Maisie, it seemed like he was intrigued by her and after a few seconds he pointed at her belly,” Jamie told Mirror about the 2015 incident. “I said to her to put her belly to the glass and Rajang started to softly rub the glass where her belly was pressed against it. Out of nowhere Rajang leaned forward and kissed the glass. Both our hearts melted and we were filled with excitement and joy.”

Jamie was the one who recorded the interaction that went viral on social media. During the incident, he also tried to share the spotlight and capture Rajang’s attention. But the orangutan was only interested in a belly that had a baby growing inside. “I put my belly too [sic] the glass and got a dirty look,” Jamie said, according to ABC7.

Rajang was in his 40s when he began gaining attention from the corners of the world. The staff revealed that he’s the most loved resident at the zoo and is “very interactive” with visitors.

Without a doubt, Rajang has a soft spot that he harbors just for pregnant women. On another occasion, he greeted another expectant mother named Morgain Cole Abbott and sent a lot of love to her baby belly through the glass. “I think I’m going to cry,” Morgain said.

“It was amazing,” the pregnant woman said about the orangutan, as quoted by HuffPost. “He kept looking me right in the eye and then gesturing and pointing at my bump. Made me really emotional. Just an incredible creature.”

In 2018, it was announced that Rajang passed away.