When Koko was told of Robin Williams’ death in 2014, she reportedly signed, “cry.”

Koko, the gorilla we all loved so much, was one of the few apes that was able to communicate using Gorilla Sign Language, a modified version of the American Sign Language. But she became even more popular after she made friends we the man who will always be remembered not only as one of the greatest actors of all time, but an amazing humanitarian who made many laugh too, one and only Robin Williams.

The first encounter between Koko and Robin, that later turned into a special friendship, took place back in 2001.

Speaking of the unique opportunity to be around Koko, late Robin said, “I recently had a mind-altering experience communicating with a gorilla. Her name is Koko.”

Why Robin made a choice to pay Koko a visit in the first place was because he cared about others so very much and was always to go above and beyond to see both people and animals thriving. He learned Koko was devastated and depressed after her playmate died, so Robin somehow knew he could make a change in her life, and he was right.

Six months after she lost her childhood friend, Koko laughed for the first time when she met Robin.

The video of the two meeting is incredible. They look at each other and sit next to one another, holding hands and laughing.

“Notice that Robin made Koko smile — something she hadn’t done for over six months, ever since her childhood gorilla companion, Michael, passed away at the age of 27,” said Francine Patterson, Koko’s caregiver. as reported by Today. 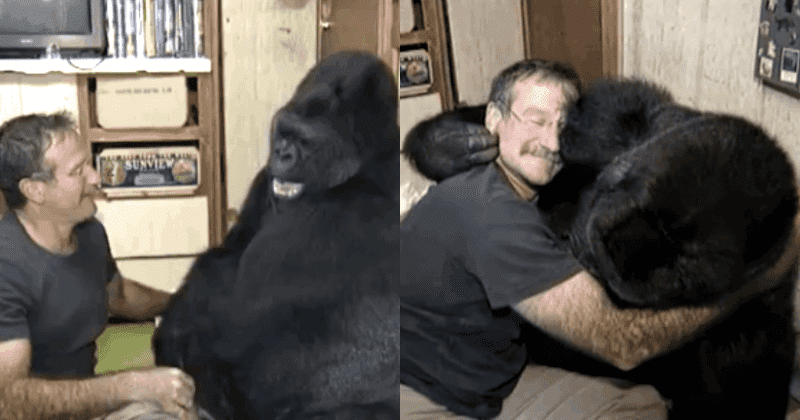 Everyone could say they had fun and a huge impact on one another. Koko tried Robin’s glasses and “stole” his wallet.

“Robin’s ability to just ‘hang out’ with Koko, a gorilla, and in minutes become one of her closest friends, was extraordinary and unforgettable,” Patterson said. “But not only did Robin cheer up Koko, the effect was mutual, and Robin seemed transformed.”

“We shared something extraordinary – laughter. Koko understands spoken English and uses over a 1,000 to share her feelings and thoughts about daily events, life, love, even death,” Robin said at the time.

Koko was born at the San Francisco zoo and spend her whole life around humans whom she loved. Her caregivers reported that when she heard of Robin’s tragic passing, she signed, “cry.”

Koko truly was a very special animal. Experts who got to work with her said her intelligence matched that of a 3-year-old child. She understood around 2,000 words of spoken English and expressed human-like behavior.

“Through mastery of sign language—the familiar hand speech of the deaf—Koko has made us, her human companions, aware not only that her breed is bright, but also that it shares sensitivities commonly held to be the prerogative of people,” Patterson said.

One of the most famous photographs of Koko which brought her even greater popularity is the one where she was posing with a camera, taking picture of herself in the mirror, which was on the cover of the National Geographic magazine published in 1978.

What was even more incredible about this world-famous ape is that she had a cat pet that she took care of and raised like her own child, named All-ball. “The cat was a Manx and looked like a ball,” said Ron Cohn, a biologist with the foundation. “Koko likes to rhyme words in sign language.”

Once, Koko ripped a steel sink from the wall and signed, “the cat did it.” The relationship between Koko and All-ball is still dubbed as one of the most unusual and sweetest friendships between animals of different kind.