Four old guys are walking down a street They turn a corner, and see a sign that says 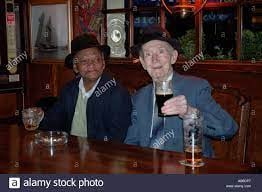 Four old guys are walking down a street They turn a corner, and see a sign that says, “Old Timers Bar – ALL drinks 10 cents.”
They look at each other and then go in, thinking this is too good to be true
The old bartender says in a voice that carries across the room, “Come on in and let me pour one for you! What’ll it be gentlemen ?
“There’s a fully stocked bar, so each of the men orders a martini
In no time the bartender serves up four iced martinis shaken, not stirred, and says, “That’s 10 cents each, please.”
The four guys stare at the bartender for a moment , then at each other
They can’t believe their good luck ! They pay the 40 cents, finish their martinis, and order another round
Again, four excellent martinis are produced, with the bartender again saying, “That’s 40 cents, please.“
They pay 40 cents, but their curiosity gets the better of them They’ve each had two martinis , and haven’t even spent a dollar yet
Finally, one of them says, “How can you afford to serve martinis as good as these for a dime apiece?”
“Well I’m a retired tailor from Phoenix,” the bartender says, “and I always wanted to own a bar Last year I hit the Lottery Jackpot for $125 million and decided to open this place
Every drink costs a dime Wine, Liquor, beer it’s all the same”
“Wowv! That’s some story!” one of the men says
As the four of them sip their martinis, they can’t help noticing seven other people , at the end of the bar who don’t have any drinks in front of them and haven’t ordered anything the whole time they’ve been there
Nodding at the seven at the end of the bar, one of the men asks the Bartender, “What’s with them?”
The bartender says, ” Oh yeah , they’re retired people from Florida ; they’re waiting for Happy Hour when drinks are half price