Family ‘distraught’ after beloved dog dies after being scared by fireworks 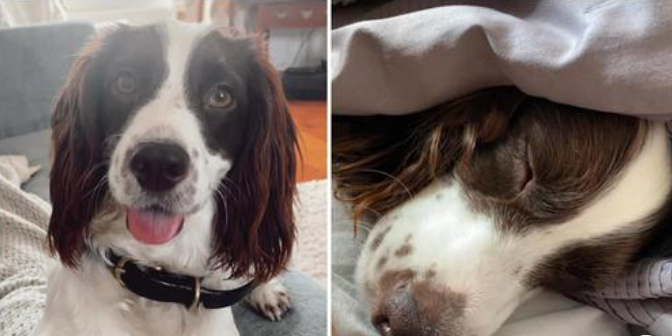 Many people celebrate holidays by setting off fireworks — but what can be enjoyed as a fun, festive display for humans can be a nightmare for animals.

Our pets have sensitive hearing and don’t understand what fireworks are, so when they hear the loud explosives outside it can be a terrifying experience. Many pet owners have spent a Fourth of July evening trying to calm down their dog. But sometimes it can be even more serious — some pets have been literally scared to death, begging the question of whether fireworks displays are worth the cost at all.

Now, families are mourning the loss of their beloved dogs who died after being scared by fireworks.

Cadi, a five-year-old Cocker Springer Spaniel, was the beloved dog of Garry Hamilton and his family, who live in Cardiff, Wales. But this week, they received the tragic news that their dog’s live had been cut short far too early. November 5 is Bonfire Night in the UK, a celebration typically celebrated with fireworks displays. But the skies were still quiet when the family let Cadi out into the garden so she could relieve herself.

But while the dog was outside, the fireworks started — and it scared her so much that she bolted through the fence away from the home.

“It was all quiet when we let her out, but it suddenly got very noisy very quickly,” Garry Hamilton told the Daily Mail. “She must have freaked out and escaped somehow.”

Her escaped quickly took a drastic turn: the panicked dog ended up in the street, and she was struck by a car. Someone brought her to the vet, and the family received the “awful news” over the phone. ‘A Cadi shaped hole in our hearts’

“We’re distraught,” Garry said. “She was such a fantastic dog, very affectionate. I loved our walks together.”

It’s always devastating to lose a pet, but Cadi’s death was even more so because it was so preventable, if the fireworks were more regulated.

“Hope everyone enjoyed their fireworks, we lost the most beautiful girl in the world to them last night,” daughter Caitlin Hamilton wrote on Facebook. “There’s the biggest Cadi shaped hole in our hearts and she didn’t deserve her fate, just short of her 6th birthday.”

“We can’t imagine life without her.” Sadly, Cadi isn’t the only canine casualty of this year’s Bonfire Night.

Dexter, a Staffordshire bull terrier and Labrador cross from North Yorkshire, died after collapsing from fear due to fireworks.

“I thought he was just in there trembling at first but he was laid flat out on the floor,” Dexter’s owner Judith told Teesside Live. “Then I realized he had gone… it was so quick and there was nothing I could do to bring him back.”

“I was screaming and shouting Dexter’s name over and over. I was just hugging the dog and crying for a long time.”

‘People have had their fun but our whole lives have been changed’ https://t.co/2ORhVcb5Pr

The dogs’ deaths have fueled an ongoing debate about whether fireworks are worth it given the toll they have on pets and their families. Needless to say, the grieving families would like to see the displays reined in.

“People have had their so-called fun but our whole lives have changed,” Judith said. “He still had a lot of life left, it’s so unfair and so senseless.”

Members of parliament recently debated the issue, and an online petition calling for the fireworks’ ban has over 900,000 signatures. In the meantime, the bereaved are cautioning fellow pet owners to take extra care of their animals on fireworks holidays.

“I just want to warn other pet owners that, even though Bonfire Night is over, to keep a close eye on their animals,” Garry Hamilton told Daily Mail. “People will still be setting off fireworks in the run up to Christmas and we don’t want what happened to Cadi happening to anyone else’s dog.” It’s so tragic that these dogs senselessly died during fireworks displays. Our hearts go out to their grieving owners.

Do you agree that fireworks should be banned to prevent animal deaths like this? Share this story with your thoughts.

We Love Animals is now on Instagram! Follow us today for lots of adorable animal pics and great stories!