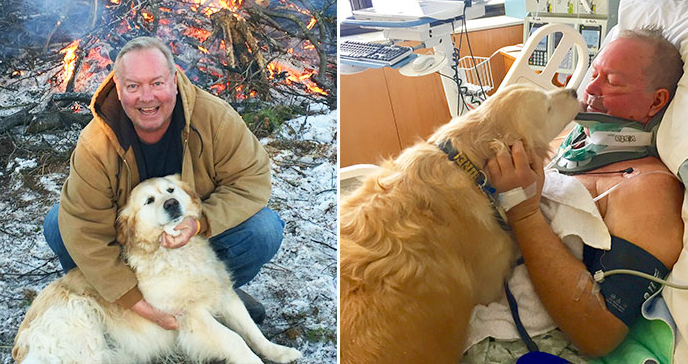 Dogs are our true friends and they prove it from time to time. Sometimes they even save the life of their humans.

Like here a golden retriever, Kelsey who proved his loyalty towards his parent. His parent Bob from Michigan slipped on ice and broke his neck outside his house.

Though he shouted for help yet no one was able to hear him as his nearest neighbor was about a quarter-mile away and it was 10:30 p.m.

It was clear that Bob was in a difficult situation as he was not heard by anyone but luckily, he had his furry guardian angel by his side. When no one was there to help him, his dog Kelsey came to the rescue. By morning, Bob’s voice was gone and he could not shout for help but Kelsey did not stop barking. 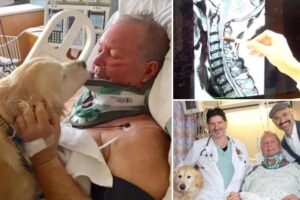 It was a freezing cold winter and Bob was only wearing his long johns, slippers, and a shirt. He was not properly dressed as he only planned to get a log for his fireplace.

But unlucky for him that he had to remain out for 20- hours and due to extremely cold weather, he was lying paralyzed in the snow.

He was alive only because of his furry friend that kept on barking for help and also remained on his side to keep him warm and alert. But in the 19th hour, Bob lost his consciousness.

Kelsey did her best and kept trying and barking. Her screeching howl alerted the neighbor and at around 6:30 pm, Bob was found.

Finally, Bob was taken straight to the hospital after he was found by the neighbor. Bob has now fully recovered and he hails Kelsey as his hero for saving his life.

Salute to this brave dog for saving his parent’s life.