Dogs are afraid of the noise of the fireworks. Many dogs perceive them as a threat. Dogs bark at the sound of the fireworks or try to run away and hide. Some dogs even show signs of anxiety-like restlessness, panting, pacing, and whining.

On the Fourth of July every year,  while celebrating Independence Day, a lot of fireworks are displayed. Fireworks bring joy and thrill to the people but they are a source of misery to our dogs that are highly sensitive to loud sounds and may even get panic attacks. 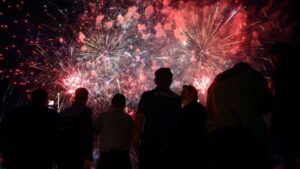 So the dogs do not enjoy the fireworks at all. There is a sad incident which happened due to the fireworks. One old dog died after suffering a panic attack during the fireworks display.

This heartbreaking story was shared by the parent of the dog, Antonella Modasjazh on Facebook. She told that her old dog Magui died after suffering panic attacks due to fireworks.

According to Antonella, her dog was very old and was frightened by the fireworks. They found it difficult to handle her when other people were having fun. She went through a very bad time.

The family tried to reach out to the local veterinarians but they did not respond.  The helpless old dog passed away as she was held in Antonella’s son’s arms. 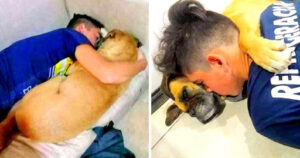 The mourning family was in a state of shock. They were unable to bear the loss of their dear dog. According to Antonella, her dog was terrified and fireworks caused her great pain.

This incident is a tragic reminder of how badly the fireworks affect our dogs. Though the situation may not be as grim in most cases yet there is no denying from this fact that they suffer panic attacks.

So whenever you are ready to set off fireworks, don’t forget to tell your neighbors with pets so that they can prepare their pets for a potential panic attack.