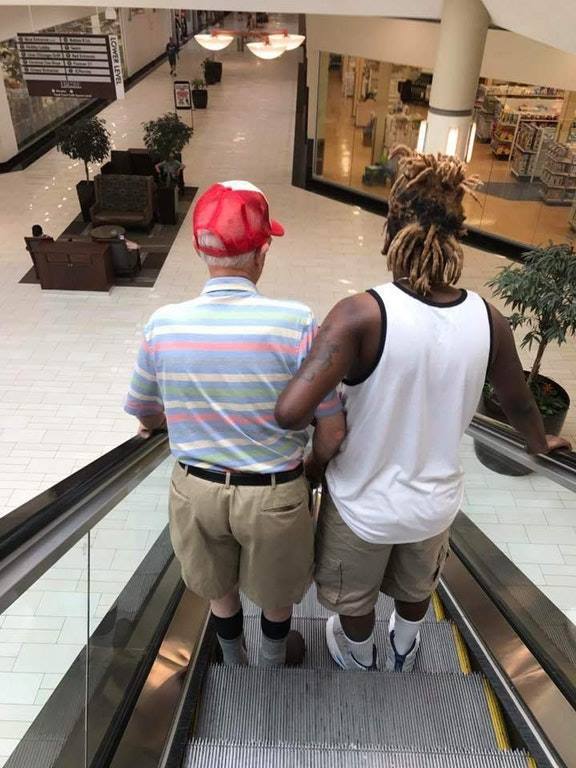 An 83-year-old man was preparing to step onto the down escalator at the Holyoke Mall in Ingleside, Massachusetts, last summer… but suddenly stopped. Fear was obvious in his eyes, and he trembled. That did not go unnoticed. 23-year-old Alonzo Johnson caught it; he could tell the man was scared to death to step onto that escalator. So Alonzo quickly changed his course and headed over to the frightened, elderly man. He asked the man if he could help him down the escalator. The man said Yes, and Alonzo took him by the arm and the two of them carefully stepped onto the escalator. A friend Alonzo was with in the mall took a photo of the two riding down the escalator and posted it on Facebook. It quickly went viral and had more than 420,000 likes and more than 25,000 comments. One of those comments read: “In about an hour, the evening news will air and we’ll be reminded of division, race wars, political mud-slinging, shootings and other heartaches. But today, violence, race, age, politics and other social lines were blurred and one person simply helped another.” Alonzo, who had no idea a photo was taken of the moment, said: “My mom always tells us to be nice and do the right thing… It’s really the way I was brought up and how I was raised.” And from where I sit, Alonzo’s mom did a pretty darn good job bringing him up.