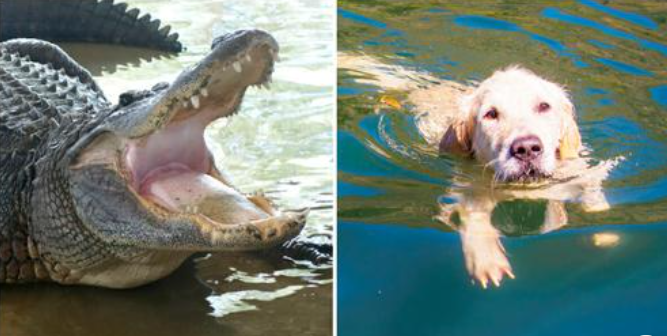 According to the Palm Beach Post, Suzan Marciano, from Boca Raton, Florida, was walking her dog Nalu near a lake on the evening of August 24.

After playing fetch, the two were enjoying the lake, with the golden retriever chest-deep in the water. But Suzan recalls her “heart dropped” when she saw a dark spot in the water creeping towards her dog.

It was an alligator, more than six feet long, and in an instant it had Nalu in its jaws. Without thinking, the senior woman jumped into action to get her dog free. “I did the only thing I could do. I came down on the alligator with all my weight,” she told the Palm Beach Post.

The gator released Nalu — but soon turned its attention on Suzan, chomping down on her hand. “It was all one big blur. I was in such shock. I didn’t feel any pain,” she recalls.

Both Suzan and Nalu survived the ordeal, but both had puncture wounds that required hospital visits. Suzan received five stitches on her hand, and Nalu underwent a two-hour surgery for wounds on her stomach and thigh.

They were also both left “traumatized” by the ordeal, and Suzan says she was afraid to go back to the park for weeks: “I was still seeing the shadow with two eyes looking up from out of the water. That image kept coming back to me,” she told the Palm Beach Post. According to the Post, the Florida Fish and Wildlife Commission investigated the site in response to the incident but could not find any alligators in the lake. A spokesperson said their program “proactively address alligator threats.”

What a scary incident. While both Suzan and Nalu were left with some injuries and trauma, we’re glad they both survived the ordeal. It goes to show how fearless pet owners can be when their dogs are in danger.